Go to 'From the Shadows' May 23rd for an excerpt from Blood Divided and a Soul Born Saga giveaway!

Visit E.J. Steven's blog, 'From the Shadows' on May 23rd for a new never before seen excerpt from BLOOD DIVIDED and a big Soul Born Saga Giveaway!!!


I am happy to say that this is my biggest giveaway to date. And I would do more if I could, trust me.. Inside the gift box you will find:
(1) Soul Born signed

Here is E.J.'s Goodreads.com announcement to the giveaway.
http://www.goodreads.com/event/show/335422-blood-divided-excerpt-soul-born-saga-giveaway
Please check it out, and enter to win. Thanks so much!

Posted by kevinjamesbreaux at 11:40 AM No comments:

Well... I finished re-watching Star Trek: Deep Space Nine at the end of April. It took me six months to re-watch the entire series of 176 episodes. First off let me say this. I really enjoyed it. See, for me this show holds a lot of meaning. I watched its original air. Those were some of the best years of my life: 1993-1999.

I remember wanting the show to never end... it was my favorite... But the final season came and it seemed to be continuously preempted by basketball games (darn you, Sixers!).  My one friend pretty much quit watching it, it became that hard to follow. This was back in the VHS days, so I did not have Comcast digital cable with a DVR. Yeah, the show would be pushed to late hours at night, sometimes airing different days.  I basically had to turn my VCR on and tape all night long with hopes of catching the show. Turns out I missed at least 3 episodes, because I clearly did not remember them. For example, the one where Nog is recuperating in the casino Holodeck program. Or the one where they had to rob the Casino Holodeck program. Missed those.

Anyway it was a struggle back then, but I remember the show ending and being very sad. Sadder than when Buffy ended.

When I finished college and was unemployed for two years, I would spend my days looking for jobs and writing. I took my dog, Amelia to my parents house for doggie day care every day since they had a huge yard for her to play in. When I got back to my house I sat in my office all day... Back then, Deep Space Nine aired on this local PA/NJ channel that you could only pick up on rabbit ears (antena... looked it up online, kids).  My tiny b+w TV delivered that channel as clear as possible, so many days I spent re-watching old eps. For some reason, maybe licensing, that channel only aired seasons 1-3. Over and over again. So when I was just re-watching the show now I remembered the older eps more than the newer ones.

To this day favorite episode of the series is the one where Sisko tells a story of how they tricked the Romulans into the war. For 1/2 of the ep. he is standing facing the viewer and speaking directly to them. That is what really makes it stand out to me. I love the writing and acting. The episode is called "In the Pale Moonlight". 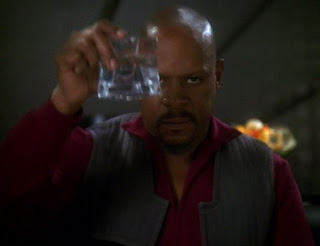 Here is the Wikipedia link for it. http://en.wikipedia.org/wiki/In_the_Pale_Moonlight

A lot has changed in my life since the show aired. ﻿I remember a day when I would have listed my favorite shows as Knight Rider and MacGyver. Now I can not stand watching them. Later I would have said Buffy and DS9.... oddly enough I still love those shows and enjoy them. My tastes have changed some, but to my lasting shock I found myself no longer in love with Dax, who I had a major crush on back in the day. Now, as I re-watched DS9, I found my focus shift to Kira. Not those first few seasons version of her (too tough), but seasons 4 on.  If I told my younger self I would have fallen out of love with Dax and in love with Kira I think he would have thought I was insane-crazy in the head-mad.

Fun fact, I met both ladies back when the show aired at Star Trek conventions in Valley Forge. :)

So after just finishing DS9 I felt empty. I wanted to move to another show. Last summer I re-watched Hercules. Before that Buffy and Angel.  What would I watch now??? I started with Voyager... and I quickly realized why I never connected with it. Unlike DS9, Voyager was not serialized and did not have a giant story arc to get swept into. So I am not sure I will continue re-watching it.

I still have to DVD sets I want to revisit. Matt Houston and StarBlazers to start. Yes, I said Matt Houston. OK, stop laughing at me. 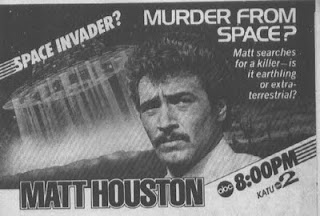 Growing up Matt Houston was my favorite show. Granted, I have not seen it since the 80s and I understand that it may be as unwatchable as Knight Rider is now, I still want to give it a shot. Stop laughing...

Email ThisBlogThis!Share to TwitterShare to FacebookShare to Pinterest
Labels: Just For Fun

kevinjamesbreaux
Kevin James Breaux has written seven books and devoted the past ten years of his life to crafting short stories and novels. He is a member of the Horror Writers Association, and the Science Fiction and Fantasy Writers of America. Breaux is always enthusiastic about the challenge writing presents. He lives by the motto “Write Makes Might!”© and sees each new page as an opportunity to improve and advance.
Newer Posts Older Posts Home
Subscribe to: Posts (Atom)